Americans Spending More Money Than Ever in Cosmetic Surgeries 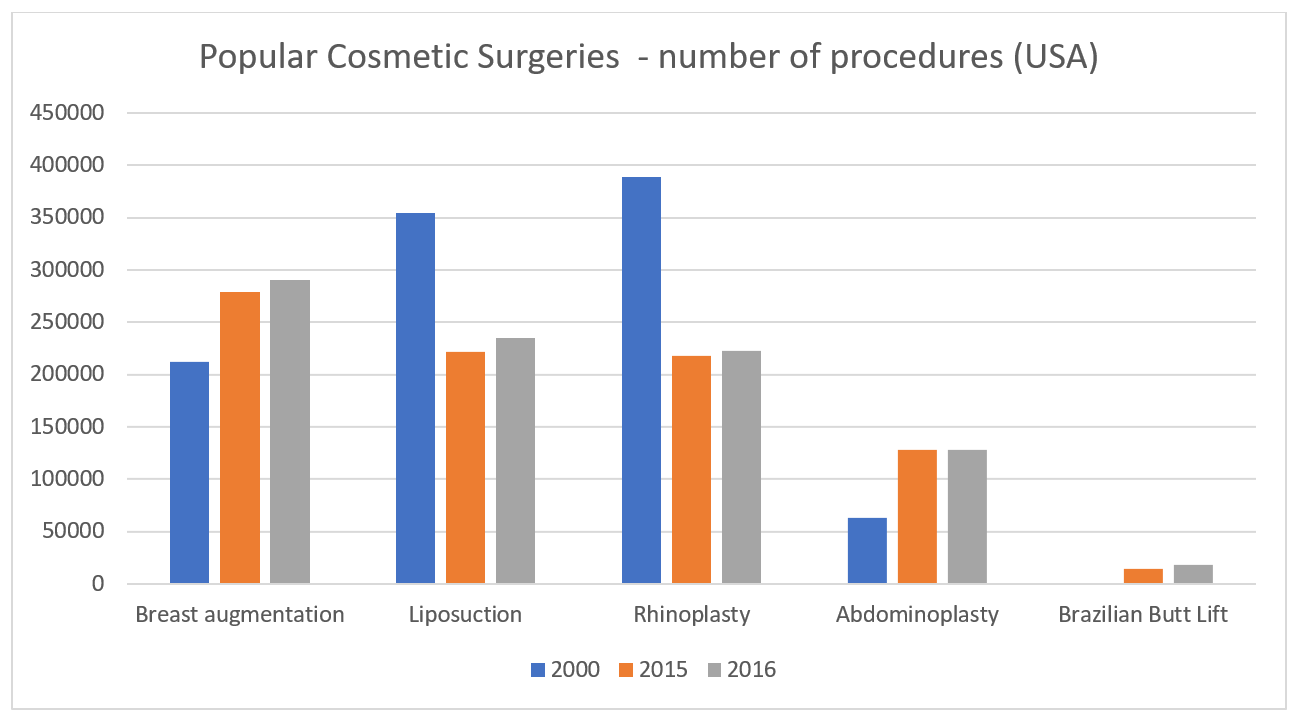 In 2016, patients spent more on cosmetic surgery than they ever have in history according to a recent report by the American Society of Plastic Surgeons (ASPS). Billions of dollars went toward popular surgical cosmetic procedures like breast augmentation, liposuction, and rhinoplasty (nose reshaping). And patients who aren’t ready for surgery yet spent record amounts on the latest and greatest non-invasive treatments like wrinkle injections and fillers, microdermabrasion, and laser treatments. Between plastic surgeries and non-invasive treatments, Americans spent about $16 billion in 2016.

While the cost of some cosmetic treatments has gone up, others have gone down as supply and demand take their toll on the cosmetic treatment industry. Liposuction and rhinoplasty surgeries have gotten more expensive (by about 6%) while the average cost of getting breast implants decreased by 3%. On average, about 7 million patients spent $385 on Botox treatments in 2016. Though economic factors can have an impact on the demand for cosmetic surgeries, Americans are generally able to justify spending on their appearance, no matter what the economy is doing.

Experts like Dr. Alan Matarasso, an ASPS spokesman, believe that the upward trend in spending for cosmetic treatments reflects the fact that plastic surgery is safer, more mainstream, and more accessible now than ever before. Whereas once, cosmetic surgery was reserved for the rich and famous, now everyday citizens can get a nose job or breast implants. Procedures are more affordable and recovery is much faster.

The rise of social media and greater transparency about plastic surgery also helped fuel interest in cosmetic treatments. Patients post photos of their surgical recovery and progress on Facebook or Instagram as opposed to trying to hide it. People see the outcomes and successes of cosmetic procedures first-hand and decide to try it for themselves. As a result, it’s more acceptable now to get a breast augmentation or Botox.

A variety of societal, technological, and economic factors have contributed to these changes in the way plastic surgery is perceived. For example, a breast augmentation procedure used to be much more difficult and risky than it is today. A decade ago, surgical procedures that took hours to complete and several days of recovery in a hospital now can be completed outpatient under sedation with local anesthesia. Many non-invasive cosmetic procedures didn’t even exist 15 years ago (e.g. there is no data for Brazilian butt lifts for the year 2000).

People want to improve their lives and improve themselves, which is part of the motivation behind why more and more Americans are seeking out cosmetic procedures according to Dr. Matarasso. People feel better about themselves when they look better and in a competitive work environment, a higher self-esteem can change the trajectory of one’s employment.

Dr. Mir Joffrey, MD is the medical director of the Lift Body Center – Chicago and Schaumburg. Dr. Joffrey graduated with high honors (Alpha Omega Alpha) from Northwestern University Medical School where he also served as president of his class. He then spent two years at the University of Michigan Hospital in Ann Arbor as a resident in neurosurgery before completing his training in head and neck surgery and facial plastic surgery at the University of California, San Francisco. After additional cosmetic training under the former director of facial plastic surgery at Stanford University, Dr. Jim Koch, Dr. Joffrey obtained training in advanced body contouring and liposuction from multiple experts across the country including Dr. Jeffrey Klein, the inventor of tumescent liposuction.